​
This tradition is usually associated with Hispanic and filipino families. Lasso (sometimes called, "lazo" or rope) is placed around the  bride and groom's shoulders (groom's shoulder's first) in the form of an "8"  (the infinity symbol) - after they have exchanged their vows - to symbolize  their everlasting union.

This is usually done by the officiant, however, family  members can also take part in this beautiful ceremony. The couple wears the lasso  throughout the remainder of the service.  It is sometimes made of white ribbon, orange flowers, fabric, silver, crystal or elaborately painted wood. It can also be  placed around the couple's necks, or wrists. If you have children; they may also be included as they will definitely be a part of the new family.

The Veil and the Lasso are both associated with a wedding prayer during the ceremony. Special additional members of the wedding party may be in charge of "lassoing" the Bride and Groom together after they kneel for the wedding prayer.

They drape what is usually a white satin circle of cord around the shoulders of the kneeling Bride and Groom.

The Lasso is a wedding ritual in which the couple are bound  together with a ceremonial rosary. Lassoing is a declaration of intent, where the bride and groom clearly state that they are marrying of their own free will. _________ and _________ since your lives have crossed in this life, you have formed eternal and sacred bonds.

As you enter this state of matrimony you should strive to make real the ideals that to you, give meaning to this ceremony and to the institution of marriage.  With full awareness, know that within this Lasso you are not only declaring your intent to be bound together before your friends and family, but you speak that intent also to God".

​After the prayer and before either attempts to rise, at the end of the ceremony, the lasso is removed by the same people who put it on and given to the bride as a memento of her becoming the mistress of the groom's heart and home.

The symbolism of the 13 gold coins in this ceremony is that the groom recognizes his responsibility as a provider, and pledges his ability to support and care for his wife.

Acceptance by the bride means taking that trust and confidence unconditionally with total dedication and prudence”.

I have officiated this ceremony including into it family members and loved ones.  It has a rich heritage among our Hispanic families.  This is a meaningful and treasured ceremony.

For more details about this beautiful ceremony please contact me at:

Or call me on my cell phone: 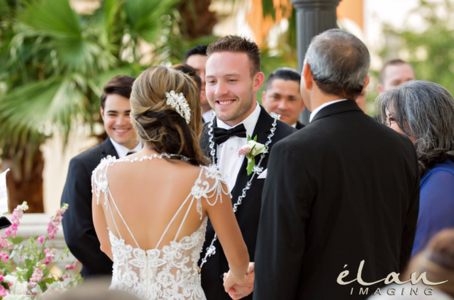 The Lasso Ceremony & The Arras Coins