A few weeks before the wedding, the groom and bride take some time to each write a letter to one another, expressing their thoughts about the good qualities that they found in their future partner, the reasons for falling in love with them and their hopes and dreams for the future. In other words, they write a "love letter" to each other and place it in a sealed envelope, with the name of their partner on the outside. They do not read what the other has written.

"The Wine Box should be opened on your 5th wedding anniversary.

There is only one other reason the box should be opened before your anniversary. If there should come a time when you hit a bumpy road in your relationship, before you give up or make any irrational decisions, open the Wine Box. The hope is that there will never be a reason to have to open the box except on your anniversary"

The Officiant will elaborate on the reasons for the sealed love letters, place the sealed envelopes in with the wine bottle and will speak about the exercise that you went through. It should be emphasized that the letters have not been read by the Officiant or by anyone else.

The box will then be nailed shut (or locked). The Officiant begins with the first nail, followed by the Bride and Groom sealing the box shut. You can have each member of your wedding party step up and nail the box shut.

For more information on this romantic ceremony please contact me at: 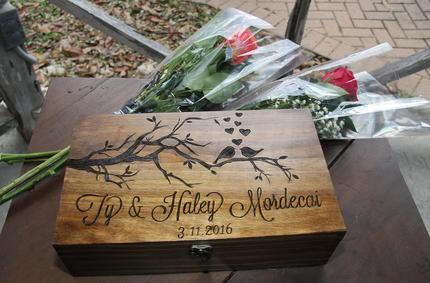